Soon after Gill died I wanted to make a quilt for Gill. This was one way I could express my love and feelings for her. Gill loved all the handmade items I make including the special Xmas gifts she received over the years. Tears would flow after she had opened one of these loving gifts, her expression of wonderment revealed openly on her face. Gill was a sensitive, warm person who valued the smaller things in life.

Making a memory quilt is a healing thing so I wanted others to have the opportunity to be part of this positive process. The response was amazing, swiss replica watches many friends and family members, including the men, were eager to be involved. We would meet weekly, chatting, (mostly about Gill) planning, learning new skills and sewing, all wanting to make a special quilt block for Gill. Numerous touching stories were shared, some of which I had never heard before. These unique stories are the backbone of Gill’s quilt. Time went on.

Some people found it difficult to visit us at our farm as there were so many memories of Gill. She had lived in the cottage for about nine years, (this was burnt to the ground in the Black Saturday fires. She wasn’t living there at the time.) Her old horse Hollywood was also a constant reminder, plus many wonderful memories were still there. All the fun times! Then about six months after we started the quilt a couple of Gill’s friends came to visit, they couldn’t help but see the progress of Gill’s quilt. As they left, I asked if they would like to contribute to the back of Gill’s quilt where there were to be small blocks which people could write something on. This would give them an opportunity to be part of this memorable quilt. Their response was fantastic, not only did they want to complete a small block but they also wanted to make one of the larger blocks for the front of Gill’s quilt.

“I want my block to be the brightest” said one friend. So off we went on another kaleidoscope of quilt- block making. Visits to families; learning new skills; talking about “Aunty Gill” and their escapades; drawing pictures of these adventures then making them into special quilt blocks all contributed to making a memory quilt full of history to be kept for ever. All because a special, most important, loving person, Gill, died too early in life and we want to offer her this quilt and keep her close to our hearts.

It’s now May 2013, and Gill’s Memory Quilt is completed. We are having a celebration and unveiling afternoon tea for all who have been involved. This is a time when Gill will be given her quilt, a time for all to celebrate their heartfelt contribution as well as a time to meet with others who have been on this remarkable journey of healing. “To Gill With Love” 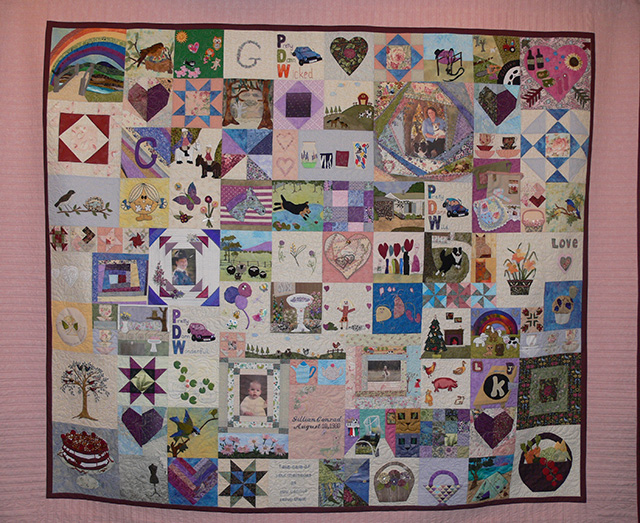 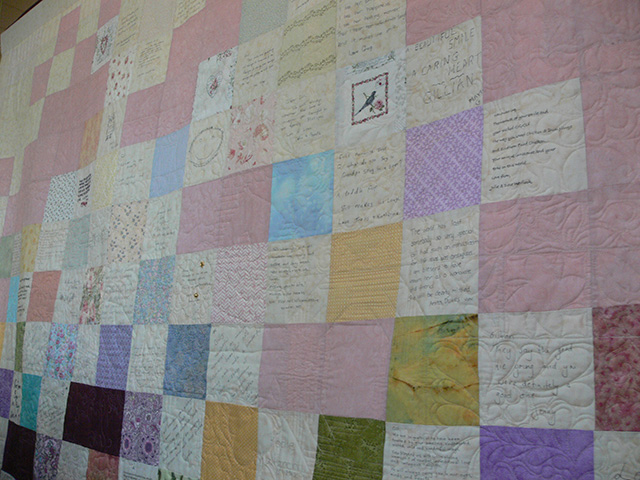 “To Gill With Love” went in the Quilt Showcase 2013 challenge held by Vic. Quilters on the 25th-28th July at the Melbourne Exhibition Centre, Southbank, Clarendon Street, Melbourne.

We are so proud that Gill’s quilt gained a “runners up” place.